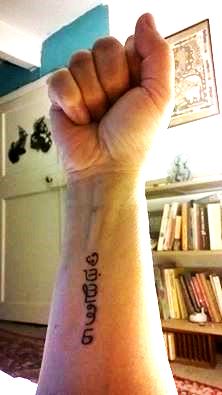 A few weeks ago, I had this tattooed on my wrist. It’s the word ‘orumai’ in Tamil.

This may seem like taking blog advertising a little too far. But there’s more to it than that.

One year ago I found myself standing in the middle of an historic moment in Munnar, Kerala.

The moment when thousands of women rose up against their paternalistic tea plantation managers, their male-dominated trade unions and politicians and said ‘you’ve let us down, so now we are going to stand up for ourselves’.

It was a turning point.

Traditionally the least powerful, most silent, biddable segment of society – lower caste, female, poor – they suddenly became the most powerful. They brought not one but two of Munnar’s major industries to a standstill, tea and tourism.

Downtrodden workers in plantations all over Kerala followed suit. Women working in the fishing industry and the garment industry were inspired by them to speak out.

They forced those in power to question themselves and how they had been treating these women for generations.

It was a life changing moment for me, too.

I left my birthplace, Munnar, at the age of nine with a vague sense that things were not right in the world. Moving to the ubiquitous affluence of England a few years later, this sense got stronger and as a teenager, I started volunteering for charities, and later working for them.

Through the various organisations I worked for I tried to help patients of a hospital in West Bengal, orphans in Zambia, refugees in Serbia, people living with HIV in Malawi…

But something still didn’t feel quite right. Yes, all these people needed help, needed justice. But why me? Beyond the sympathy that I felt for their situation and my outrage about the causes of their poverty, what right did I have to interfere in their lives?

I moved from charities to fair trade and ethical trade, and began to learn about global supply chains and how deeply interlinked we are, whether we know it or not, with those who produce what we use, wear, eat and drink. This felt more relevant.  There was a logic that connected us.

But was even that enough?

“Who is your community” asked Stan Thakaekera – co-founder of Just Change, a unique organisation trading tea grown by tribal people on community principles which I started volunteering for. That’s who you should be connecting with, he said.

And as I stood in the middle of the oncoming river of Pembila Orumai protesters, something infinitely more powerful that logic, sympathy or even outrage overwhelmed me.

It was a sense of community – of unity with these women.

Of course, there is unity in humankind as a whole – the African concept of ‘ubuntu’ which honours that which is human in each of us, regardless of where you are from; the Hindu greeting ‘namaste’ which signifies ‘I bow to the Divine in you’, implying every human contains a spark of the Divine…

But this felt like a more specific unity – if unity can be so subdivided!

I knew at that moment what I must do. I must support these women from my birthplace in their campaign for fair wages and decent working conditions and housing. It seemed to me that my whole career up to this point had prepared me for this, and fate had brought me to this precise spot at this precise moment for a reason.

I am not religious, but a Christian friend recently described this new commitment as my ‘vocation’.

“But it’s much more than a vocation” I protested, thinking of dry vocational guidance sessions at school.

“No, I mean it in the religious sense,” she said; “a calling by God to follow a certain path.”

One year ago, I set up a daily news update for ‘Munnar’. For the first few months there were daily, then weekly articles about what the Indian media called the ‘stir’.

The women were setting up their own trade union! The established trade unions  were attacking them with stones! The women were standing for election in local government! The leaders had fallen out with each other! One had attempted suicide!

But before long, the only news alerts for Munnar were from Trip Advisor asking for hotel recommendations, photos of misty green hills, sightings of rare butterflies…occasional news items about illegal building projects.

Pembila Orumai seemed like the falling of a vast tree in a forest, crashing with earsplitting force through the branches and, once the echoes had died, silently letting the peace of the countryside flood back in.

But of course, that’s just from the media point of view; the novelty had worn off and like a child that’s tired of a new toy, it has moved on to other shiny things.

Meanwhile, Pembila Orumai has registered as a formal trade union and can therefore now take part in official wage negotiations. They have joined with Aam Admi, an opposition political partly – a party of the people.  And they are continuing their struggle for decent pay and conditions, a less glamorous daily slog, but one with equally profound consequences.

So my tattoo is to remind myself of the unity of humanity.

It is to honour the women who had the courage to stand up in unity and speak out.

And it is to remind myself that a ‘vocation’ is not a passing whim, but a commitment forever.

I will, of course, continue to stand up for anyone whose rights are being abused, but I stand in unity with the women of my birthplace, Munnar.

3 thoughts on “The Anniversary of Unity”

“Overcoming poverty is not a gesture of charity, it is an act of justice.” ~ Nelson Mandela